See below for more information 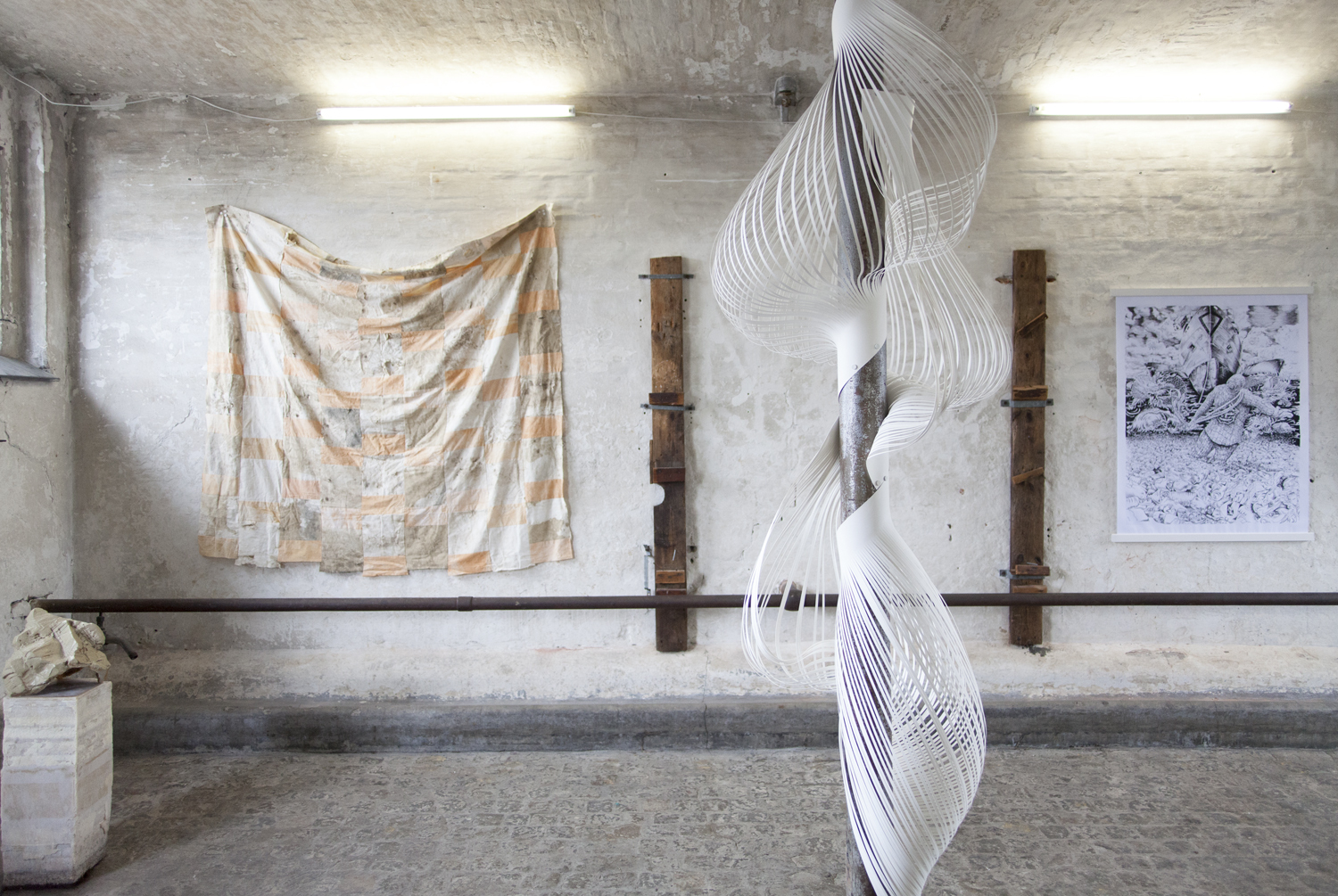 “The most beautiful emotion we can experience is the mysterious. It is the source of all true art and science.” — Albert Einstein

Scholars have ruminated on the connection between science and spirituality for thousands of years, applying folk pedagogy to explain the complexity of the world. The Greek philosopher Empedocles was one of the first to formalize this concept, stating that the foundation for all matter consisted of earth, wind, fire, and water. Respectively, Buddhist, Egyptian, Babylonian, Hindu, and Chinese scholars also drew connections with the four elements, emphasizing the universal nature of this concept.

But with the widespread implementation of the scientific method, science and religion separated, leaving folk practices like alchemy and esotericism to decline precipitously. The fallout from this schism has fostered the rise of literalism, pitting the definitive logic of science against the ascribed doctrine of religion.

Many of the works in Empedocles’ Ghost reconnect the fields of knowledge with that which is mysterious: Melissa Walter mines from her work as an illustrator for NASA, referencing near-fictional concepts like string theory, dark matter, and gravitational lensing, while Michael Carter’s interactive sculpture based on the methods of the ancient Egyptian harpedonaptai (“rope stretcher”) aligns the earth-bound viewer to the celestial bodies with great precision.

Some link the technology of today with the supernatural: Sean Noyce’s video projection renders data visualizations from sound frequencies of an ancient Greek funeral song, while Jenalee Harmon’s laminated transparent sequential photographs are an ode to time, space, speed, and technology of the Futurists that subtly allude to the hidden entities behind those forces.

Others reference Empedocles’ contribution to science and philosophy: Debby and Larry Kline’s large format pen and ink drawings of the four elements contain the visual language of illuminated manuscripts, while Samuel Scharf’s sculpture alludes to Empedocles’ himself, who was said to have committed suicide by throwing himself into Mount Etna; Scharf playfully invites viewers to toss a period-styled sandal into a ring of cobblestones, loosely referencing the active volcano. 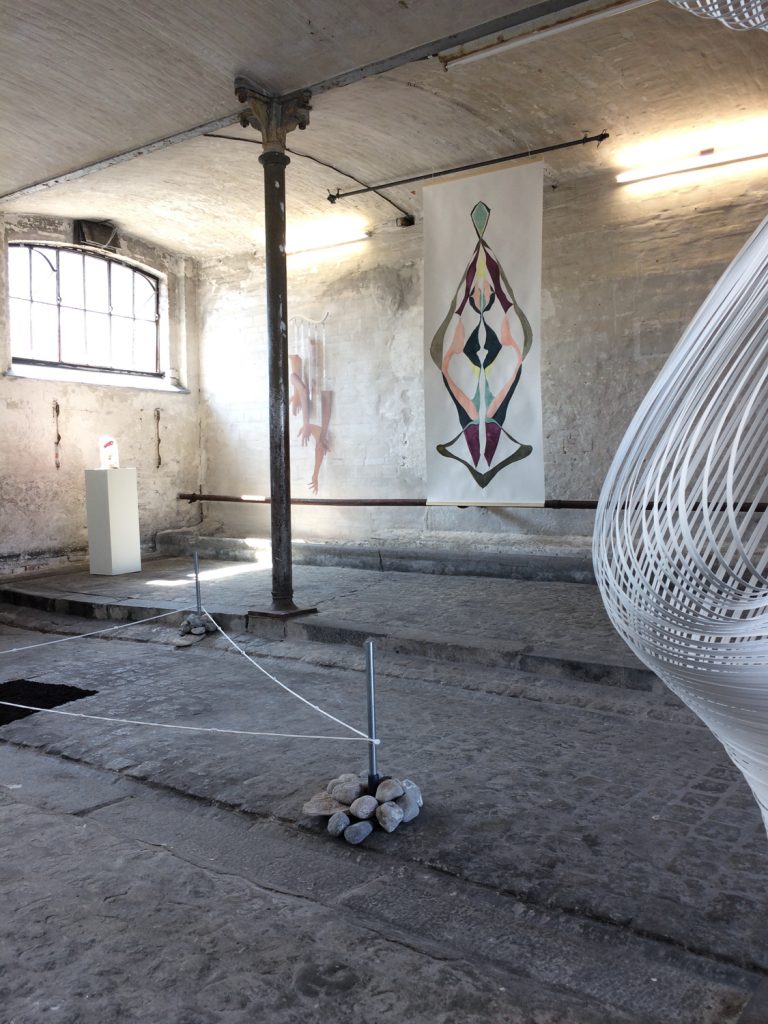 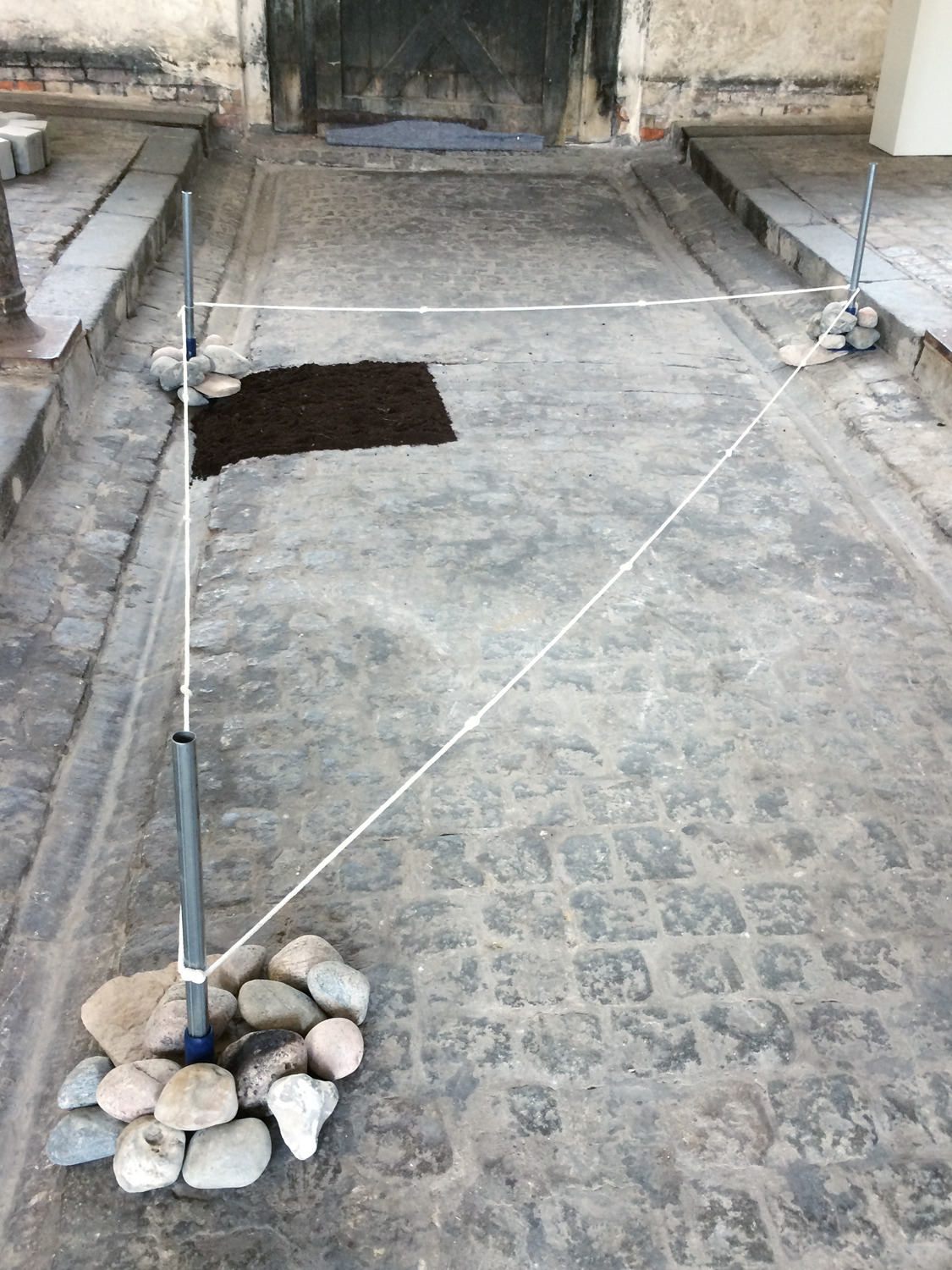 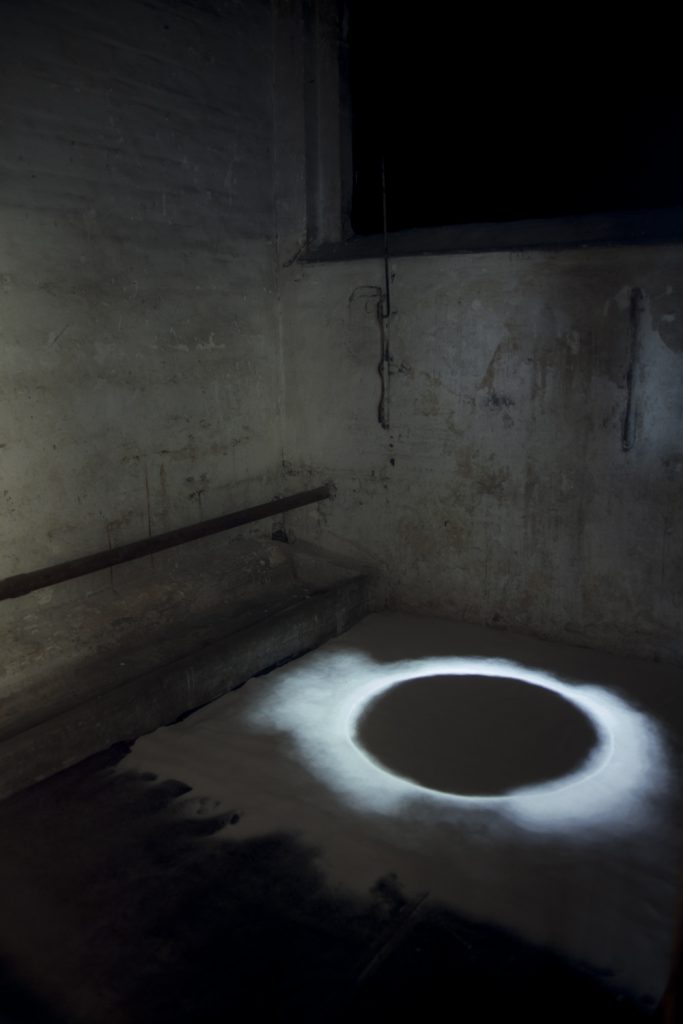 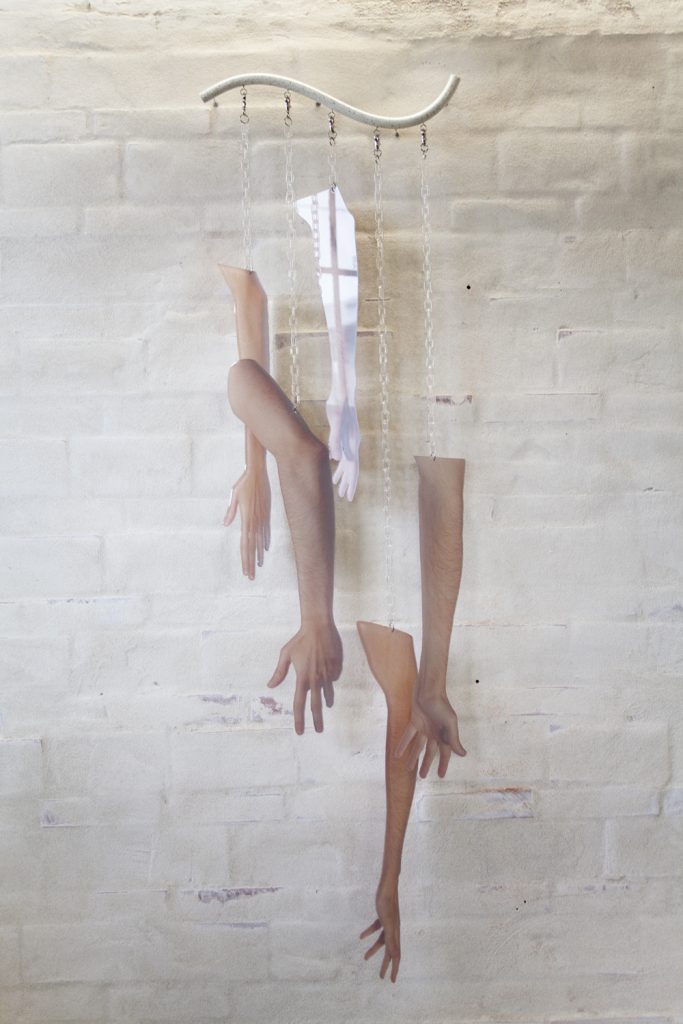 Jenalee Harmon, Inert Under My Gaze 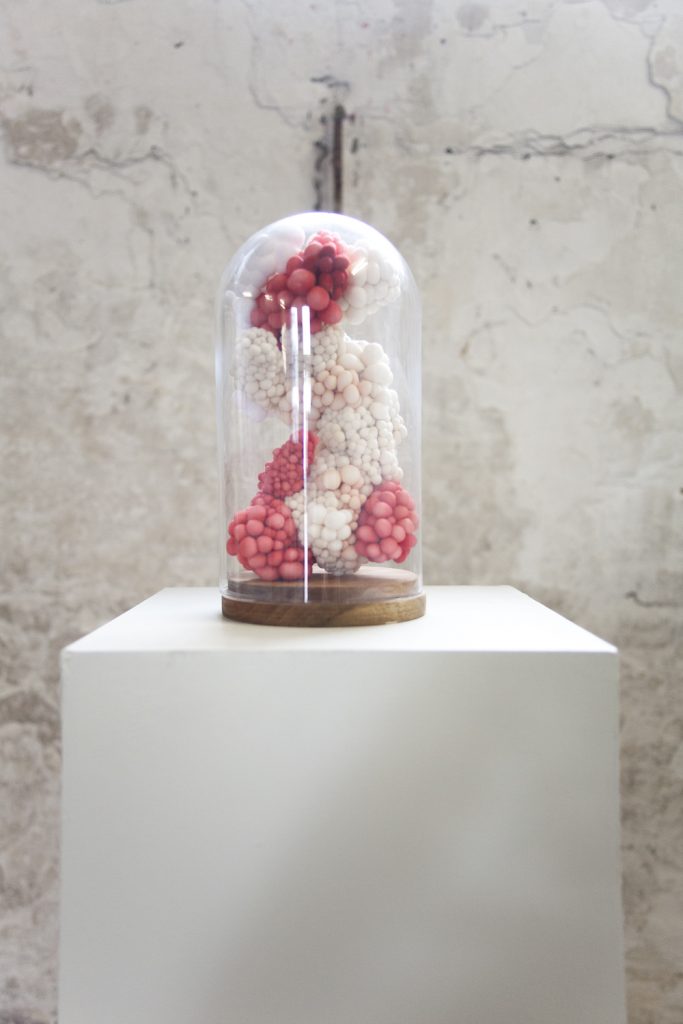 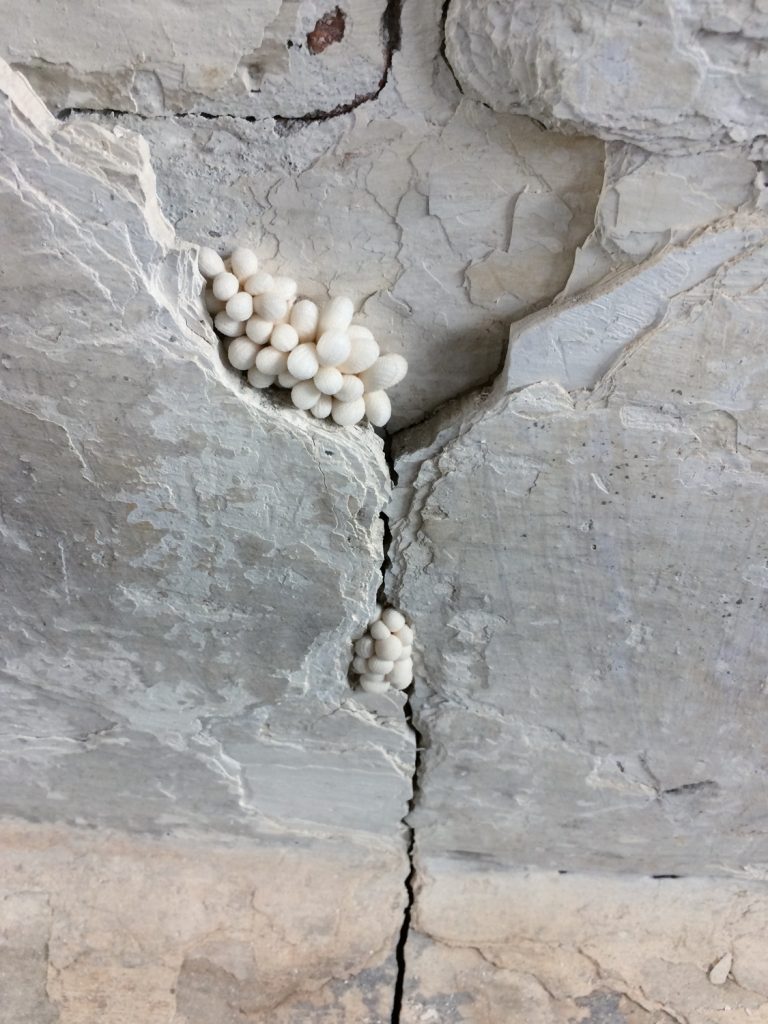 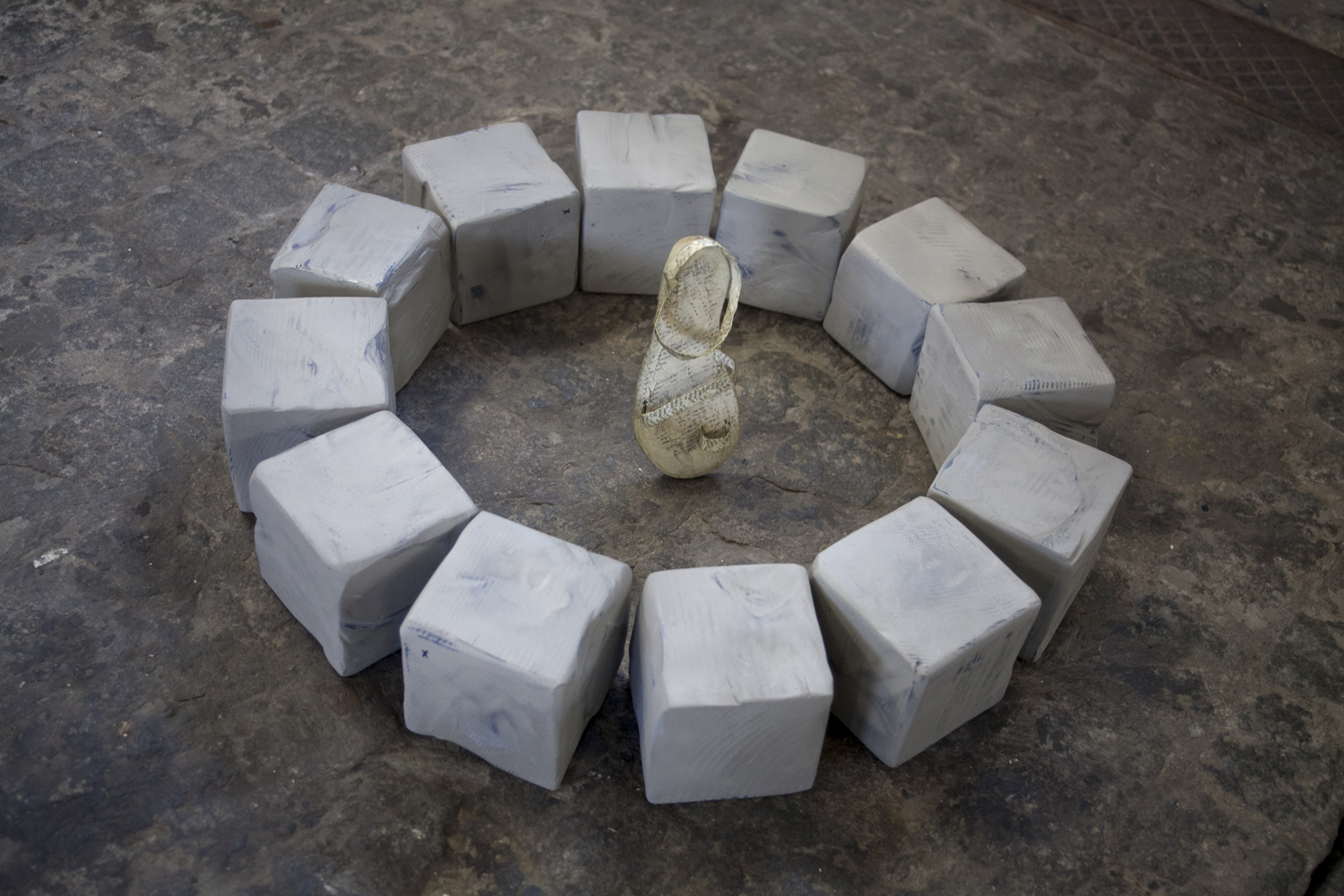 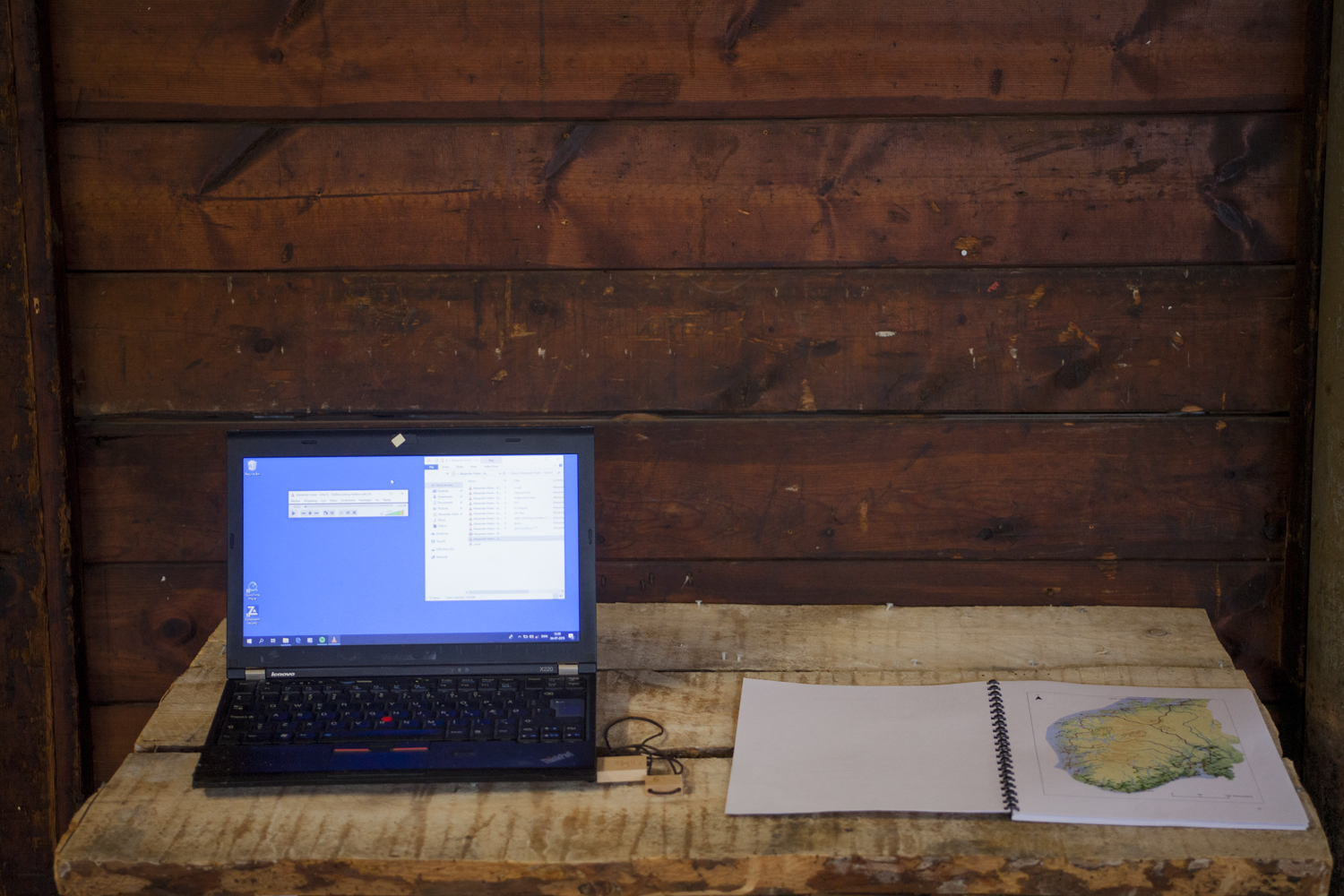 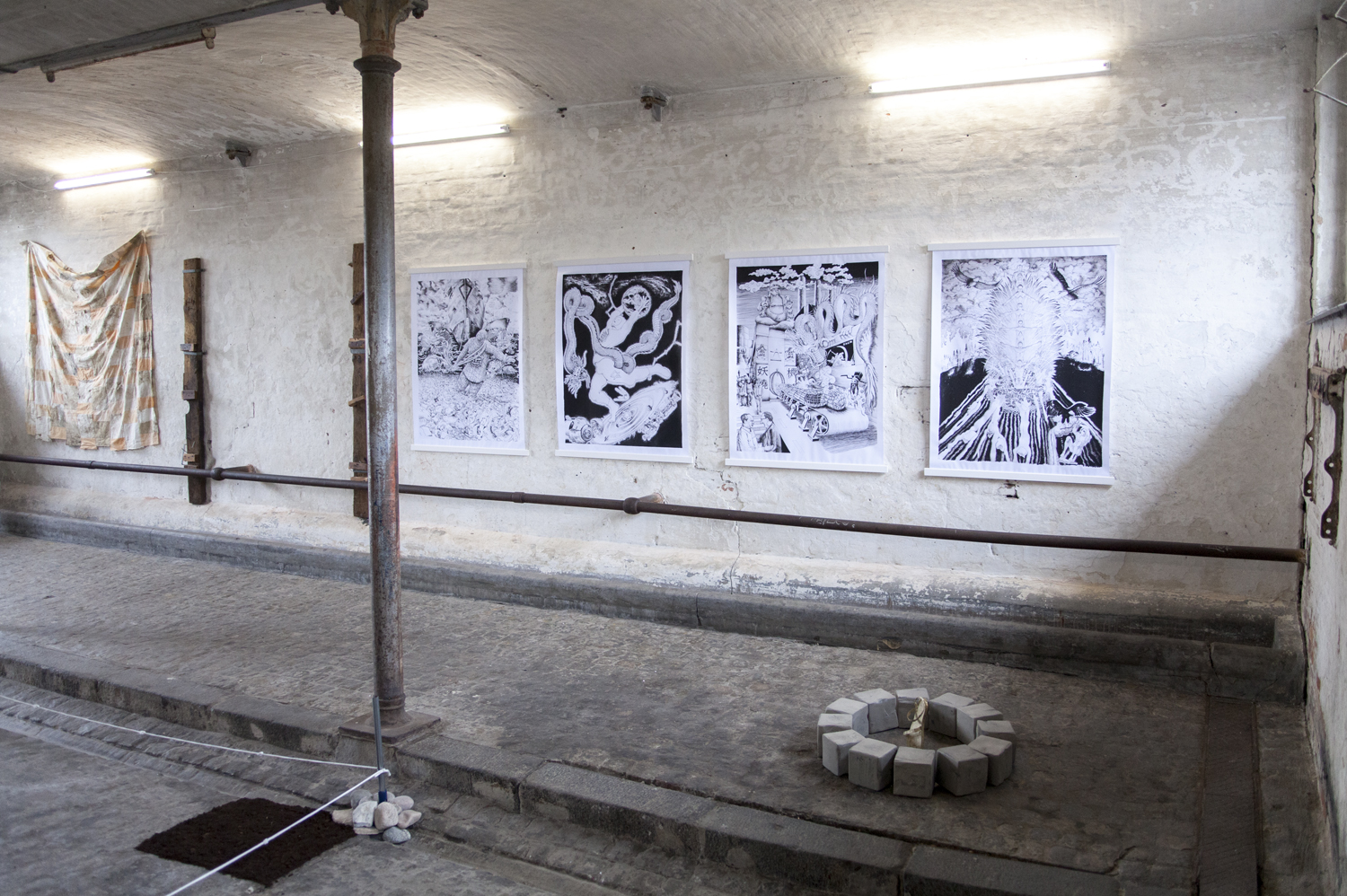 From left, Camilla Reyman, Quilt for the children of compost, Debby and Larry Kline, The Alchemist Suite: The Four Elements, Water, Earth, Air, Fire and Samuel Scharf, A Poem for Empedocles

Sean Noyce’s Funeral Procession merges the technology of today with the mysticism and rituals of antiquity. Sampling a modern recreation of an ancient Greek funeral song, Noyce stretches the recording over 100 times so that the audible moments are abstracted to haunting drones and chimes. The recording is then imputed into a program that Noyce has written, rendering visualizations from those sound frequencies. The video projection references the fleeting moment when the spirit leaves the body as it travels between the transitory plane between the living and the dead.

Debby and Larry Kline’s The Alchemist is part of a large-scale installation devoted to the living cycle of trash. The main character is both ancient and modern. His garb is based on Han dynasty (206 BC–220 AD) jade burial suits. Through a contemporary translation, he has become a sleek superhero, emblematic of industry. The Alchemist shapes our world by creating value added products from raw or recycled materials, though his tendency towards overproduction is often to our detriment. We have created many drawings detailing his journey. The drawings in this exhibition are based on the alchemical principles of the four elements (earth, air, water, and fire).

Samuel Scharf’s sculpture alludes to the ancient Greek philosopher, Empedocles, who was credited as one of the first to theorize that all matter consisted of the classical four elements of earth, air, water, and fire. Empedocles was said to have committed suicide by throwing himself into Mount Etna so that the people would believe his body had vanished and he had turned into an immortal god. Scharf playfully invites viewers to toss a period-styled sandal into a ring of cobblestones, loosely referencing that dramatic moment at the volcano.

Michael Carter’s Solar Alignment reconnects the viewer to the hidden forces, properties, and geometries that bind the universe. Not unlike a neolithic earthwork, Carter’s interactive sculpture positions the earth-bound viewer with the sun using technology of the ancient Egyptian harpedonaptai (“rope stretchers”). As the viewer grounds themselves near the square patch of soil at the corner of the Euclidean triangle, they are positioned in alignment with path of the sun, represented as a golden disc perched high up in the gallery. Solar Alignment stresses the importance of hidden affinities and shared experiences that affect us on a deep, visceral way, and have inspired higher thinking for several millennia.

Jenalee Harmon’s photographs represent the liminal space between two distinct moments in time: the one that has just passed and the one that is yet to come. Meticulously produced and staged, her works are inspired by the theatrics of performers, magicians, illusionists, and trick photographers of 20th century cinema. Harmon’s sequential photographs exemplify a world in constant motion — an ode to time, space, and speed of the Futurists, machine learning and technology of artificial intelligence, and the mystery and intrigue of the supernatural.

Melissa Walter visually explores concepts concerning astronomy and astrophysical theories. Walter has worked as a graphic designer and science illustrator for NASA’s Chandra X-ray Observatory and as a team member of the Harvard-Smithsonian Center for Astrophysics. Her experience has inspired her to visually articulate wonders of the Universe, such as black holes, supernovas, neutron stars, dark matter and more recently, dark energy. Walter’s use of sound, dramatic optics and lighting within her sculptural installations embed a transcendent quality to the experience of her work while infusing cosmic energy into ordinary materials such as ink and paper. She translates and materializes the intangible knowledge of the Universe into an aesthetic physical reality for a personal experience.

Camilla Reyman works within the fields of abstract painting, sculpture and installation art. She investigates the thought of consciousness as a kind of matter, and the fact that this matter might have agency of its own. Camilla Reyman prefers working with materials made by non-humans: plants, silk, dirt, beeswax, organic pigment etc, and sees her work as a collaboration where her artistic intentions and the materials themselves create the final outcome on equal terms. Reyman states, “I am interested in how materiality has been perceived throughout human history: how it surrounds us in everyday objects, how it has been and is used in shamanic practices and how it is researched in science and dissolved in quantum physics.”

Alexander Holm GiVa1G is a wooden USB drive amulet holding a number of files documenting an exploration of hollow oak trees collected in the southern forests of Norway in summer 2017. The drive includes sound, images and video, as well as 1 hour of music based on these files. The materials were collected in the company of biologist Ross Wetherbee, and originally served the Norwegian University of Life Sciences’s research on the fading numbers of hollow oaks in Norway, the impact they have on local biodiversity, as well as our current era of global mass extinction. The files on the amulet capture a specific process which are as follows: When an oak tree is 200-300 years old, a goat horned beetle eats halfway through the tree into the core of the trunk to eat its marrow. The beetle carries a virus that infects the tree to let it die slowly over the following 400-900 years as a hollow grows inside it. As time passes, the hollow hosts an increasingly huge number of plant and insect species which only exist in the conditions of the tree. The files point towards a specific time and place: Scandinavia around first millennium; covered in forest — “Trees Of Life”; Norns sitting at the foot of Yggdrasil spinning the fade of humanity; a dragon slowly eating the roots; a squirrel bringing messages from the dragon to an eagle; the eagle sits in the crown watching over middle earth; on its’ beak sits a hawk waving its wings, pushing the winds; somewhere else four deer are resting, eating off the crowns leaves.

Nymphaea/Åkande by Daughters of the 12th house (Naja Ryde Ankarfeldt & Elena Lundqvist Ortíz) grows from a society that sees the human as outside, beyond or above nature, we initiated an exploration of the nature that is closest to us: our own bodies and the space surrounding by concretely placing our bodies directly on paper as templates and tracing the outline of our limbs in different postures. Through the union and crystallization of our two practices and bodies, a new body emerges, that appears as an inversion of the Vitruvian Man. Rather than reproducing the narrative of anthropocentrism, and the white male human form as the measure of all things, Nymphaea reconfigures the human as always entangled with other species. Using this method we want to craft another story of the human.

The work is influenced by spiritual practices in a secularized society, in an attempt to reintegrate spiritual and material worlds. The project is part of ongoing research and collaboration, where we use tarot and astrology, and a specific investigation of the 12th house, which represents the mystical and unknown dimensions of life. Initiating our collaboration we drew the tarot card “Philosopher of Stones”, more commonly known as “Page of Pentacles”, as a guide for our composite energy. The card renders a human in a lotus position that is also used as a template for Nymphaea.

Katya Usvitsky’s sculptures explore birth, growth and decay through the process of alchemy. By transforming women’s pantyhose—a vestige of centuries when women’s bodies were expected to be corseted and smoothed to be socially acceptable—Usvitsky stretches and contorts the medium, infusing it with a new, multidimensional life, reminiscent of biological processes including cell division, mutation, and replication. The mysterious transmutation of the piece bubbles up against the limits of the bell jar, threatening to fracture a vessel designed to isolate, constrain, and classify living matter.


PART 1: Family Underground performs during the exhibition of Empedocles’ Ghost on Sunday, July 9, 2019.


PART 2: Family Underground performs during the exhibition of Empedocles’ Ghost on Sunday, July 9, 2019.

Alexander Holm and Mads Kristian Frøslev perform during the exhibition of Empedocles’ Ghost on Sunday, July 9, 2019.


Francesca Burattelli performs during the exhibition of Empedocles’ Ghost on Sunday, July 9, 2019.


A member of the mysterious group, Mycelium, reads from their book of prose during the exhibition of Empedocles’ Ghost on Sunday, July 9, 2019.